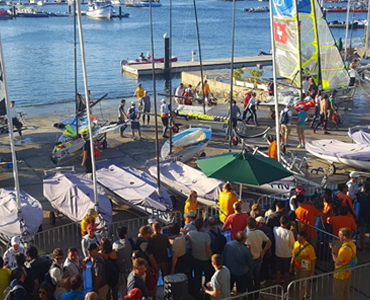 A normal day in Rio

We are on the eve of the first gold medal races (Sunday), in the RS:X windsurfers, and there is a buzz around the marina mixed with relief as last of the classes (49er skiffs) finally began their campaign on Friday, day five of the competition – a long wait!

The Olympic Broadcasting Service helicopters have just flown overhead – same time every day, 12:36 – to get into position on the live course which unfortunately hasn’t really delivered the best footage of these Olympic Games. The OBS can’t move production to the outer courses so the stills photographers have been the ones capturing the most dramatic images. Frustrating but the nature of the sport is being at the mercy of the weather.

A normal day at this stage is a late morning arrival, catch up on emails then from 13:05 I watch the TV that has the complete broadcast from the live course (sorry I know this will cause a lot of jealousy back home), and have multiple web pages open.

We’ve had some big days summarising six to eight classes per day and usually interviewing the top two in each class in two different mixed zones. A mixed zone is a long fenced and segregated area where the athletes walk along one side and speak to media in an order that is very carefully managed by a mixed zone manager and their assistants.

Olympic Broadcasting Services (Olympic channel) is first, then the rights holders (paid to be there), then other TV and then at the end the press mixed zone which is for all other media and where the writers wait to speak to the athletes.

We split up our team of three, one recording the OBS interviews but not able to ask questions then we have a roaming person who follows the athletes along the fence to see if they give the ‘killer quote’ to another media outlet, or to interview them ourselves. The third reporter is over at the Flamengo beach mixed zone. 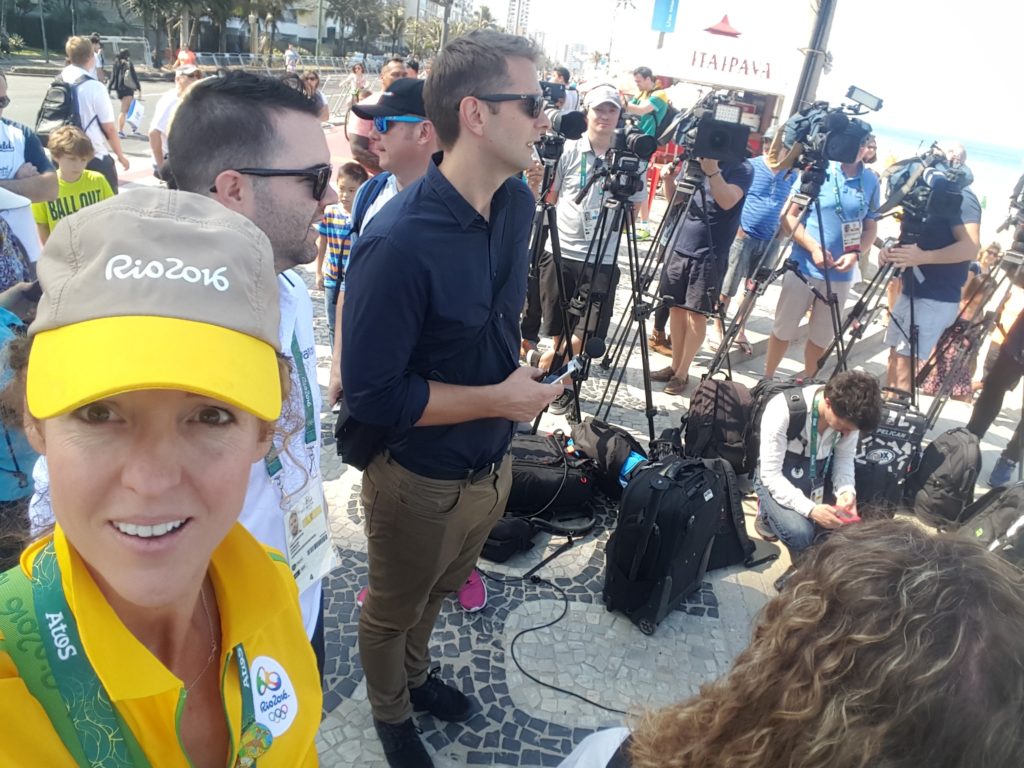 A team of language services staff hang in the background, in case they are needed to translate between the various media outlets and the athlete.

Eight classes use the main mixed zone at the marina and the Nacras and RS:Xs the beach mixed zone, next to the dais where the medal presentations will all happen August 14-18.

Other than my daily review, we produce up to three sets of athlete flash quotes, which are the best comments we select from our interviews to go into the accredited media portal.

I leave Rio in one week and I know I’ve broken the back of my first international event. It is an amazingly rewarding working alongside the sports great writers, photographers and commentators, and my professional confidence at an all-time high.

There was going to be a blog about Brazilian food but really I haven’t put my finger on the essence of their fare apart from incredibly tasty/salty Brazilian meat, empanadas and multiple variations on the pastry pocket, black beans and rice, pizza, pasta, cheesy balls, hamburgers…..

I’ve had no time to do a food tour but would recommend this to anyone planning a visit.

Hope whoever you are following does well in the medal round. Go Aussies.