I’ve been asked this many times off the back of my first Rolex Sydney Hobart Yacht Race.

The start was unexpectedly quiet. Being inside the exclusion zone and one tier back from the supermaxis, helicopters and pursuing media boats I found surprisingly tranquil.

Our start was slow and sloppy in the light winds and chop at Sydney Heads, made worse by the powerboats heading back to the harbour with a convivial wave, unaware they’d stopped us dead in the water.

It was a relief to escape the washing machine; then there was just us and a few Clipper boats, and open ocean to Hobart.

I can’t say the experience was cold, hard or frightening given the ensuing three days brought warm following winds.

Being on a small ship meant it wasn’t wet like the TP52 crews and other planing boats had it. The only salt water on Kialoa ran down the gunwales as her 45-tonnes pushed out millions of litres of ocean and when the occasional random quarter wave slapped against the hull, sending a spray down the necks of those facing it.

There was that tiny drip through the hatch above my head in my cabin, but I didn’t think I should mention that in the midst of the bar stories describing walls of whitewater gushing over the decks then finding its way below by the bucket full, soaking living spaces and beds.

I couldn’t join in on the conversation about basic accommodation and food either.

There were plenty of warming cups of tea and coffee. Grant or ‘Grunter’ our cook served Devonshire tea and warm scones one afternoon, and the whipped cream had to be smothered quickly before it blew off the jam layer. Ah the perils of offshore racing. There were three homecooked hot meals a day, sugary super dooper ice blocks, homemade cookies, rumballs, a shot of Whisky passing Tasman Light, a roast pork dinner from scratch. 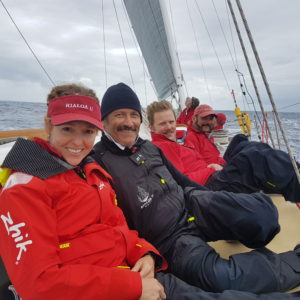 Below deck individual wooden draws held everyone’s clothes and personals and two of the three cabins featured an ensuite.  That’s not to say we showered or changed clothes over the three and a half days, and the gastro that struck down a few of the ship’s crew did quarantine one of the three heads.

It’s not to say there weren’t bruises down the back of the legs or challenges sleeping as the boat constantly pitched and rolled, but for a first Hobart I’m well aware the degree of difficulty was low.

Some of the moments easily recalled are the dolphin escorts, seabirds, moonlight on the water, the funny stories at 1.30am on deck as my shift came to an end. I took note of the calm among the crew when the giant aluminium boom snapped during a gybe on the second day, and the analytical approach to tying it off safely then hoisting alternate cloth. 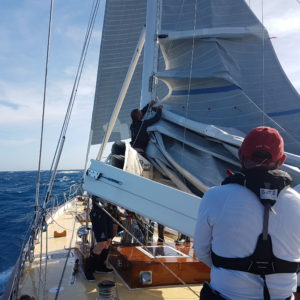 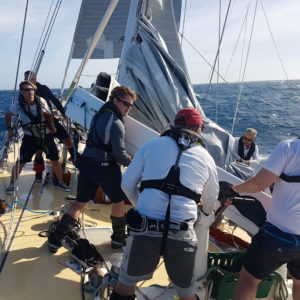 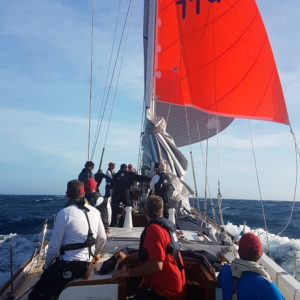 Meanwhile the conversation in my head went something like this: ”Oh God we are going to Eden? I don’t want to go to Eden on my first Hobart. My bag’s in Hobart and Luke’s going to be in Hobart, and now how will I get there? I’m sure the crew hate me for taking photos at this moment.”

There was never a mention of retirement and the recovery was testament to the incredible seamanship aboard KII. While the breakage certainly hurt our finish time, the forecast never suited a weighty 1960s built displacement boat in terms of our overall result.

Coming across Storm Bay the old girl lit up. We had five sails straining, including the loose-footed mainsail and a 35-degree angle of heel on. A sunset finish with plenty of breeze in the Derwent River was a spectacular way to mark Kialoa II’s return to the bluewater classic the S&S 73 dominated back in ’71. And we were feeling pretty clever finishing well ahead of their course time. 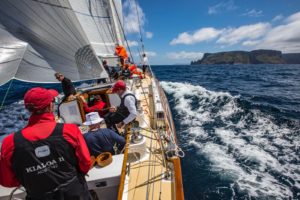 Following a mass de-fuzzing of moustaches marking the end of the crew’s Movember efforts it was off to quench a giant thirst and numb some of my pain having opened up my knee during a fall on deck at the finish. I’m sporting a scar to prove my race, and clumsiness.

I could have run tours on the hour over the next three days in Hobart, such was the interest in Kialoa II and sailing era it stands for. I stayed on the boat and became a sucker for those who came near enough and demonstrated they knew the tinniest thing about the sport, inviting them onboard to appreciate the beauty and craftmanship within.

‘Would you do it again?’ is the other question I’m asked a lot.

Based on my debut experience it would be hard to find a reason not to.

Article in The Australian Sat December 23.